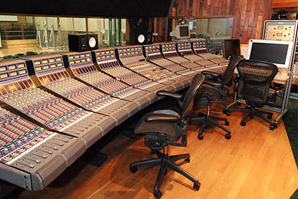 The issue at hand

We have an artist who is an excellent pop vocalist and happens to be a very petite woman. Her voice, especially when pushed, tends to contain some piercing frequencies in the 2–4 khz range, and some microphones tend to accentuate her sibilance. For this particular project, the producers are using first-call musicians, top studios, and want to spare no expense in the production of her album. Our goal is to find the best one or two microphones for the singer, then work on the vocal production in the producer’s lab, where everyone is comfortable and no studio clock is running. 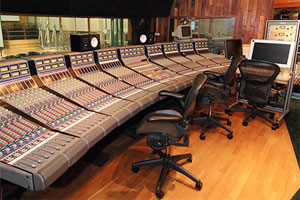 For the first day of vocal mic selection (yeah, the first day of vocal mic selection — must be nice, right?) we are Ocean Way Studios in Hollywood (again, must be nice, right?). Fortunately for us the studio has an extremely large collection of microphones, and a staff who is intimately familiar with the collection. In the control room, we have a highly modified Focusrite console, a Neve sidecar, an API sidecar, and some Avalon M2 preamps. We chose the Focusrite console preamps for the mic tests because they sound fantastic, we have like 72 of them, and we have access to an ISA channel back at the lab.

Also, in my experience with mic pre shootouts, the Focusrite preamps always place at or near the top, thanks to their large, slightly thick, but not noticeably colored sound. At the lab, we will have access to the ISA, along with a VOXBOX, Chandler Germanium and Little Devil modules, Telefunken V72s, Great River MP500NV, Toneluxe MP5As and a custom built Ampex tube pre from an old tape machine. I felt that with these choices later in the project, the ISA will give us a fair middle ground to hear the character of each microphone.

For the microphone choices, I have narrowed our selection down to a small plethora of mics. Here are the options, and my initial thoughts behind them:

Neumann U 47 – Another obvious choice and this mic should smooth out the harshness and add some warmth.

Neumann U47 fet – Should be a little more closed in and maybe punchier than the ’47 Tube.

Neumann U 67 – Lots of attitude with the openness I like for pop and rock, especially on younger singers.

Neumann U 87 – Not my fave vocal mic, but good mojo and sometimes just the ticket.

Sterling Audio ST6050 – suggested by my assistant, a custom designed derivative of the Sterling ST77, which I sometimes find useful on voice.

Miktek CV4 – Another favorite of mine. Perhaps a little more warm and colored than a U47 or the Cathedral Pipes, but in a very good way.

Audio-Technica AT4050 – One of my vocal underdog heroes (along with the AT4033). Maybe not the mojo of the Neumans, but always useable and versatile.

Manley/VTL CR-3A – An old (discontinued) standby and certainly worth a shot. (Not the same as the Reference Cardioid tube mic in production today.)

Sterling Audio ST77 FET – The basis for the Ocean Way ST6050, which we have, so it might be an interesting comparison.

beyerdynamic M 160 – This is an interesting ribbon mic and will give us a totally different take on the vocals.

So, we have our mics lined up and our singer warmed up. For the trials we have chosen a song with a typical range and style for this album. That is, low-register, smooth verses, mid-level bridges and belting chorus in the singer’s upper range — basically, your typical pop/rock song. Each test will consist of recording the first verse, bridge and chorus of the same song, with the same Focusrite preamp. No compressor will be used for the shootout, and, although the musical tracks have each been recorded onto Ocean Way’s Custom Ampex 124 tape machine, we opt to cut vocals straight to Pro Tools HD, using a Prism Dream converter at 96khz. For compression, we will later choose between the VoxBox, the ISA, an ACME Opticom, Inward Connections’ Brute, or a Cathedral Pipes Yellow Submarine, depending on the song and style (once again — must be nice, right?).

I’ll give you the winner first, and then the overall impressions for each mic. Remember, this exercise was to choose the best mic for a particular singer, who may not be the “typical” singer. Going through this process was interesting for everyone involved and while it may have been overkill for every project, this time around we had the time and resources to go the extra mile.

For me, the character of the winning mic must meet three criteria: Are the problems frequencies of the singer enhanced or diminished by the mic? Do the presence and emotion of the performance translate well? And finally, will processing done during the mixing enhance the vocal without bringing more problem frequencies to light? Only experience with the way you, or your mixer, treats vocals will allow you to predict where the sound will go during processing, but I always assume that in my mixes there is a tradeoff between sibilance and clarity and presence (through both EQ and limiting) and harshness. You can always add one more processor to the vocal to fix a problem, but we are very sensitive to the human voice’s timbre and every processor adds a veil to that character. That said, here are the results…

The first day ended with the 47 FET the clear winner, and the Ocean Way ST6050 a close second. It was not surprising that the 251, U67 and U87 sounded a bit thin and bright, since these mics tend to emphasize clarity and lean towards the bright side. I was surprised that U47 Tube and Cathedral Pipes mics did not impart a warmer tone to this voice. Maybe the proximity effect never got a chance to fill in the bottom because of the distance from the mic that was required during loud passages. The 47 FET gave the most musical representation of her voice and the Ocean Way mic held up well, but didn’t quite have the depth of the 47FET.

On our second day of tests, things got more interesting. This time, the Miktek CV4 beat the pants off the 47 FET. The CV4 sounded big, open and its slight warmth added nice lower harmonics the voice. I know I will be able to EQ and limit this sound without bringing out any harshness or harming the clarity.

The other two contenders that emerged were the Audio Technica 4050, which sounded very even, but perhaps a little flat dynamically and the Miktek C7, which also sounded very well balanced and a bit more musical than the 4050. This came as a surprise, since the C7 tends to be a bright sounding mic in most applications, but for some reason, this voice hit this mic in the right way. So after two days of singing, the producers chose to use the CV4 as the primary mic, with the C7 kept handy in case that tone was more appropriate.

Here are the subjective impressions of each mic:

Neumann U47 fet – Good overall balance. Tamed harshness, no sibilance, a little flat on the dynamics in comparison with others.

Neumann U 67 – Too thin for this singer.

Neumann U 87 – Slightly sibilant and not flattering for this singer.

Audio-Technica AT4050 – Well-balanced and clear. Maybe too clinical for this voice.

Every case is unique and only through experience do we gain an appreciation for the subtleties of each mic and application. This was a unique individual with issues that we approached through extensive mic testing. If I had only one or two mics on hand, I would have made it work somehow. Different orientation of mic to mouth distance, foam windscreens, varying room acoustics and eventually signal processing would have gotten us to a useable outcome — they always do. The most appropriate mic for this session might not work tomorrow, but today we are all happy with our choice.