HM2 and HM4 Review by Sound on Sound 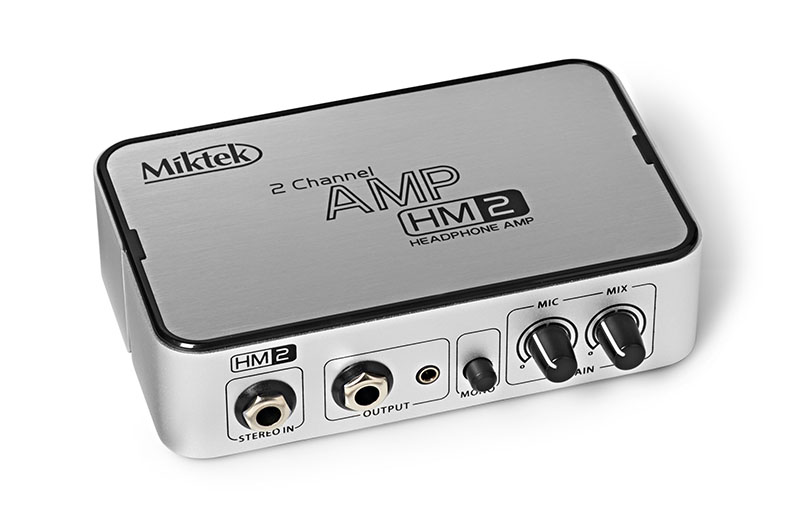 Miktek have launched a range of utility products, all of which share a similar form factor and measure 144 x 102 x 38 mm. The casework, distinguished by its rounded corners, has a plastic core adorned with aluminium sides and top, plus grippy rubber strips at each end of the base to ensure stability. Power comes from the included universal 20V PSU, which has power-socket adaptors for worldwide use.

The HM4 is a headphone amp that’s able to feed four sets of headphones, each with its own level control. Output four’s quarter-inch TRS jack and a mini-jack wired in parallel are located on the front panel, while the other three TRS jack outputs are located on the rear. Also on the rear is the TRS stereo input jack, along with a Mono button that sums the two inputs to mono.

As expected, the input impedance is fairly high (100kΩ) so it will accept most line-level sources up to +19dBV. Each output has a 100Ω impedance and so may not be best suited to very low-impedance headphones, but it should be happy with most studio ’phones. There’s very little background hiss, with a 90dB signal-to-noise ratio, and the distortion figure is reassuringly low at better than 0.005 percent. No power output is quoted, so the test results here will simply answer the question: ‘Does it go loud enough while still staying clean?’ And the simple answer is that it does, at least with all of my headphones.

There’s really no more to the HM4 than that, but if you only need a headphone output for yourself, you can opt for the HM2. Despite the lower channel count, the HM2 model actually has a more sophisticated feature set than the HM4. Again there’s a stereo input and output on TRS quarter-inch jacks, plus the mini-jack output wired in parallel (both can be used at the same time), but this time the mono button is on the front panel, along with two rotary controls, Mic and Mix.

Looking at the rear panel reveals what these are all about, as there are Mic In and Thru sockets on balanced XLRs as well as a Mix Thru output. Phantom power from the mixer or recording system is carried from the Thru socket to the Mic In socket if active. The idea is that if you feed your mic through the box, you can blend the direct mic signal with what you hear coming back from your recording system or PA mixer, to give latency-free monitoring. On stage, performers can balance themselves against the rest of the band if using headphones or in-ear monitors. The spec is similar to that of the HM4, with a quoted frequency response of 10Hz to 93kHz. I did notice a slight volume drop when engaging the Mono button but it was nothing serious. There’s also a little audible hiss if the mic amp gain is maxed out, but for a typical close-miked vocal you probably won’t need the gain that high.

Both these units are very competitively priced and go about their business in a workmanlike way. If you want to get the job done without spending too much and you don’t need more in the way of sophisticated facilities, Miktek’s headphone amps deserve a closer look.