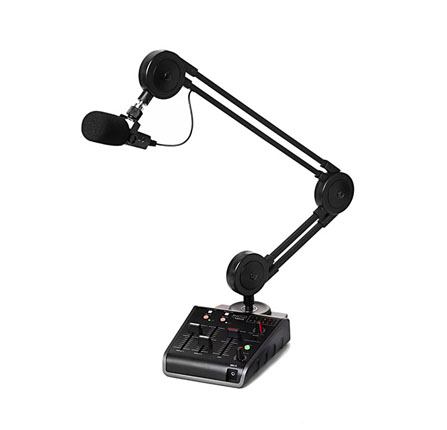 As the name suggests, Miktek’s Procast SST is aimed at those using desktop systems who put together podcasts, but the quality of the microphone, hardware and converters makes it equally well suited to musicians who record only one or two parts at a time. Essentially the Procast SST is an all-in-one desktop package that combines a microphone, a two-channel audio interface and monitoring, all built to a standard that’s intended to meet the needs of more serious users.

Sitting at the end of an adjustable radio-style swivel boom arm is a small but solidly built 24-bit USB back-electret capacitor microphone with a 19mm super-cardioid pattern capsule and switchable low-cut filter. Knurled knobs at the joints allow the arm’s stiffness to be adjusted. The mic’s response is quoted as 20Hz to 16kHz, though it sounds nicely ‘open’ at the high end. The spec sheet declares a nominally flat response and a maximum SPL handling of 135dB. No noise figures are included but as long as you work at sensible levels background noise isn’t a problem.

Built into the base is the mixer section with two sets of rear-panel inputs used to connect external mic or line sources. Channel one can be switched from the USB mic to a line/instrument jack while channel two uses a mini-XLR to connect a second mic but can be switched to a line/instrument jack. A 3m mini-XLR to standard XLR adaptor cable is included, as is a foam wind shield for the mic and a USB cable.

Both inputs are controlled by 60mm level faders and have green-to-red clip LEDs, and the mic/line source-switching is independent for each of the two channels. Phantom power can be switched on for channel two and there’s direct headphone monitoring via mini-jack, which has a control to balance this source with the computer’s audio playback to avoid latency. A third fader controls the overall monitor mix level and a second headphone output can double as a feed to active loudspeakers. Other niceties include an input mute switch for each channel, stereo LED output meters and a button for summing the two channels to mono.

What all this adds up to is a convenient dual-channel interface/mixer/microphone package that sits on your desktop and requires only a USB cable to connect to the computer — this connection takes care of both audio-interface and power-supply duties. The Procast SST feels very solid and stable, in large part due to its very weighty metal base, and I found that I could set the mic at any angle without it all toppling over. During tests, my Mac recognised the interface as a USB-compliant device and was immediately available for selection within my DAW software. Audio tests confirmed the signal quality from the mic to be very natural and clear sounding and there was plenty of monitoring level too. While there are other USB mics out there that will deliver a very similar level of performance, the very solid construction and desktop convenience of the Procast SST makes it very appealing. All you need to add is some recording software, a Mac or PC and you have a recording studio.