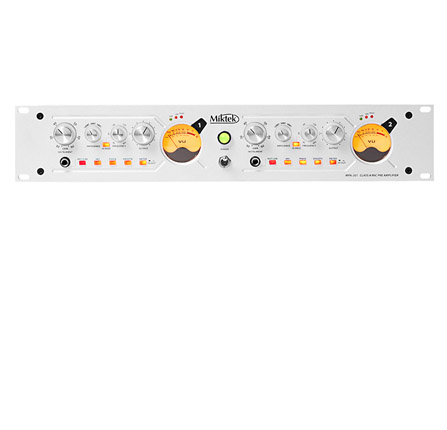 This Nashville-built preamp offers a new take on a classic British console sound.

Physically, the MPA-201 is an attractive unit. Its 2U all-black chassis is mounted behind a textured aluminium front panel, with two identical sets of channel controls sitting either side of a central power switch and indicator lamp. The rear panel is dominated by the massive housing for the externally mounted mains power transformer. Other visible, rear-facing features are the balanced XLR connectors of the paired channel inputs on the extreme right, outputs on the extreme left and, nestling close to the transformer housing, the inevitable IEC fused socket and voltage selector.

A quick internal inspection revealed a clean layout, an overall high standard of construction and the complete absence of anything surface-mounted. Circuit-wise, the MPA-201 draws on a design legacy that originated not far from the SOS offices near Cambridge and follows (though not slavishly) the discrete transistor, Class-A, transformer-balanced I/O paradigm established back in ’70s. The two shielded input and one unshielded output transformers per channel are custom-made by US company AMI, who also supply the transformers for Miktek’s microphones. In the MPA-201, one input transformer balances the microphone XLR whilst the other handles the front-panel instrument/line quarter-inch TS jack, and is specifically voiced for its primary role as an electric guitar and bass DI. The sizeable output transformers sit either side of the central power supply board, remote from their channel PCBs.

On the two channels, a stepped gain knob, common to both mic and DI inputs, covers a range of 15dB to 70dB, indicating that the input transformers boost the input signal by 15dB. The impedance of the mic inputs can be switched, by relays, between 1200, 600 and 300 Ω, allowing you more precisely to match the MPA-201 to the impedance requirements of vintage moving-coil or ribbon microphones. You can, of course, choose to deliberately mismatch the MPA-201 to any microphone in order to experiment with the resulting frequency response. Associated with the inputs are two illuminated buttons, one switching on 48V phantom power and the other activating the relay that reverses the polarity of the output signal.

Switchable high-pass filters, continuously variable between 18 and 300 Hz, come next and are followed by the Output control, which sets the level going into the output transformers and thus determines the level of harmonic and non-harmonic distortion that they introduce into the signal. Associated with the output stages are the channels’ Smooth switches, which activate relays connecting termination resistors to the transformers. This useful function is not unique to the MPA-201 — it had its genesis back in the days when some bright sparks started repurposing old mic/line/EQ modules from old consoles into ‘channel strips’. What wasn’t realised at that time was that simply unplugging the modules left behind their individual termination resistors. The role of these resistors was to control the high-frequency resonant peak in the modules’ output transformers to ensure a flat frequency response up to 20kHz, very gently rolling off above that. Without those resistors in place, when the orphan modules were driven into a line input with a modern standard 10kΩ input impedance, their frequency response would rise gently from 20kHz upwards, giving a sense of brightness and ‘air’ to the sound. I can’t say that I remember anyone mentioning this difference back in the day, although I do recall often hearing a popular tale concerning a Neve console with a ‘mis-wired’ channel that had a frequency response out to 150kHz — and just how wonderful that channel sounded!

The MPA-201’s front panel offers plenty of control, including selectable input impedance and a variable high-pass filter. The rear panel, dominated by a heavy transformer, hosts balanced XLR inputs and outputs, as well as a switchable-voltage power inlet.Finally, signal levels are monitored on two combination meter displays. A large, illuminated, old-school analogue VU meter, calibrated to +4dBu output level at 0dBVU and switchable between input and output, sits just below a three-LED ‘traffic light’ meter, which displays the instantaneous peak signal level. The peak meter allows you to monitor the level going from the MPA-201 into your A-D converter and is calibrated so that 0dB represents a +18dBu output level.

Operationally, I found the MPA-201 extremely intuitive. Functions work as you’d expect and buttons light up when their functions are engaged, with the exception of the permanently illuminated Inst/Line switch which glows green at its Instrument (DI) setting and red at Line. The DI/line input, which switches out the mic when a jack is plugged into it, has a sound that, for electric guitar and bass, offers a useful alternative to that of the mic input. Although I felt that I heard a bit more of the transformer when I plugged my guitar into the mic input, the DI does have a very solid sonic character that works extremely well, especially for electric bass guitar.

How useful the three microphone input impedance settings are to you will depend on the mics in your arsenal. As I’ve found in the past, it is usually the response of dynamic and ribbon mics that is most likely to change. However, the degree to which this occurs depends on the interaction between the particular microphone’s output transformer and the preamp’s input transformer, so finding the ‘best’ setting is a matter of trial and error. My old stereo Bang & Olufsen ribbon mic sounded happiest at the 300Ω setting, an SM57 was a far better mic at 600Ω, whilst my AKG C414B-ULS, whose specifications call for a load impedance of less than 1kΩ, seemed to remain unaffected by any change in impedance.

The wide range of the high-pass filter, which sits in circuit after the mic and DI/line inputs, proved very effective at cleaning up unnecessary low-frequency clutter, and also extremely useful when it came to removing or tailoring the low end of a source for creative effect.

The Smooth function is quite subtle in operation, with the high frequencies sounding more open and more present when the switch is disengaged and seeming to sweeten towards that ‘vintage console’ sound when the termination resistors are in circuit.

As you’d expect from its heritage, transformer-balanced I/O, the Miktek MPA-201 sits very definitely at the vintage Neve end of the sonic spectrum. It has the deep, warm low end, smooth mid-range and clear highs that bring to mind the Neve 1272 and 1073, without sounding as though the designers had set out to build a clone of either. Add in the variable impedance, the high-pass filter and the Smooth switch’s in-frame/channel-strip high-frequency response options, and you’ve got a twin-channel microphone preamplifier that is capable of producing impressive results.

Mind you, since it has that classic transformer sound, the MPA-201 is not going to be for everyone. Overall I loved it, despite the couple of occasions when I’d have liked the ability to increase the drive into the output transformers without having to pad the output down to avoid toasting my A-D converters. If you want a clean, pristine-sounding microphone preamplifier there are plenty out there to choose from, but if (like me) you want a bit of character, the Miktek MPA-201 is a unit that you really ought to hear.