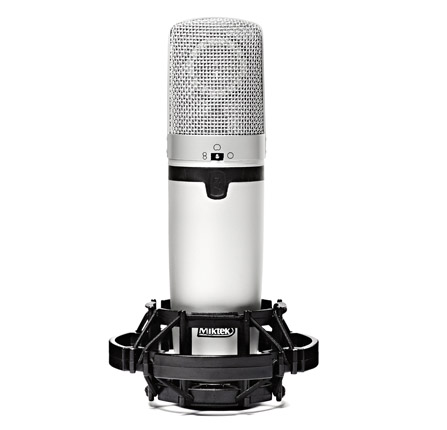 Though costing less than a grand, this versatile mic can compete with some of the very best.

Designed with ‘classic’ European styling, and with its internationally sourced parts assembled and tested in Nashville, USA, the Miktek C7e is a multi–pattern capacitor microphone with a dual–diaphragm, one–inch capsule at its heart. This centre–terminated capsule is built using five–micron, gold–evaporated mylar diaphragms and is suspended in a dual–layer mesh basket. A miniature toggle switch selects cardioid, omni or figure–of–eight polar patterns, with two further switches enabling a 100Hz, 12dB/octave high–pass filter and a 10dB pad. The mic body and grille are finished in satin silver, and the lower half of the mic body, separated by a rubbery black band, is secured via a chunky locking ring that can be unscrewed without recourse to tools. Though it isn’t immediately obvious, the front of the mic is the side with the pattern switch.

The FET preamp circuitry uses good–quality discrete components, which include hand–selected transistors, metal–film resistors and two small trimmer pots which are presumably used for setup after manufacture. There’s also a small slide switch on one of the circuit boards that allows the user to switch the capsule bias voltage from 48 to 60 Volts, giving a choice of two voicings (the 48V option is set when shipped). When biased with 48V, the capsule’s diaphragm is under less tension than at 60V, as there’s less electrostatic force. This must have an effect on the high-frequency diaphragm resonances, hence the change in voicing. Miktek tell us that the 60V setting produces an extremely accurate and articulate response, and this was confirmed in my tests. The lower voltage setting seemed to me to be slightly more flattering. An AMI T7 audio transformer is used in the output stage as part of Miktek’s aim to replicate the tonal ’sweetness’ of classic vintage mics.

Each mic bears a serial number and comes, with its own frequency plot, in an elegant wooden box, packed alongside a swivel mount and an elastic suspension shockmount in an aluminium camera case. The included accessories are of adequate quality, though I’m sure if you treated the C7e to a Rycote shockmount and pop screen it wouldn’t be considered an extravagance.

By way of specs we see the usual 20Hz to 20kHz response (supported by the aforementioned individual plot), and though it seems to be somewhat ‘smoothed’, it does reveal a gently rising response above 1kHz reaching a peak of maybe 6dB around 11 or 12 kHz, before dropping away again. Sensitivity is a typical –29 to –38 dBV/Pa, depending on polar pattern, with the equivalent input noise (EIN) also being pattern-dependent, ranging from 13dBA to 22dBA. Standard 48V phantom power is required for operation, and SPLs of up to 127dB can be tolerated before the distortion level starts to increase to any significant degree.

Miktek promote the C7e as a multi–purpose microphone, but primarily as a vocal mic, and despite its middle–of–the–road price tag, the C7e turns in a very classy performance in cardioid mode that could put many higher–priced boutique mics to shame. The transformer circuity gives the low end an extra sense of density, with an almost valve–like warmth, while the highs are open–sounding and detailed, no doubt aided by that subtle high-frequncy lift. Speech sounds very natural while being treated to a little ’stealth’ flattery, and the results with acoustic guitar were as good as with any mic I’ve tried within recent months: plenty of sparkle but without the phasiness you sometimes hear from lesser mics. Depending on where you place the mic, you may need to add some low–cut filtering, but other than that the guitar sound is pretty much spot on as it comes.

Switching to the higher capsule voltage robs the mic of a little of its ‘flavour’, but if anything, enhances the sense of focus and definition slightly, so it’s a nice alternative to have. In fact, it is a pity this switch wasn’t placed on the mic body where it would be a little more accessible. The alternative polar patterns produce a broadly consistent tonality, though of course you’ll pick up more room sound in the omni and figure–of–eight modes, and omni mode doesn’t give you any artificial bass lift from the proximity effect. The figure–of–eight pattern has the most proximity boost, which is to be expected, but also has the benefit of almost perfect off–axis rejection at 90 degrees. In cardioid mode the rear rejection is impressive, and there’s none of that congested quality that some cardioid mics impart. For speech I left the low–cut switch engaged most of the time, with no detriment to the vocal sound. On paper, the noise figure is no better than average for a large-diaphragm mic, but I didn’t hear any self-noise during my tests.

To sum up, this is a very nice microphone indeed. The C7e competes well with boutique brands such as Telefunken, ADK, Avantone and so on, as well as posing a serious challenge to some of the established European brands.